ISIS’s Favorite Hashtag Is a Weapon of War

[……]According to Evan Jendruck, an analyst at IHS Jane’s Terrorism and Insurgency Centre, the new ISIS hashtag is par for the course when it comes to an organization that’s been slowly designing their targeted social media campaign to pair alongside their military operations.

“The AllEyesOnISIS twitter campaign isn’t itself overly significant; the group undertook the well-planned campaign in an attempt to underline its online grass-roots support base and further spread its extremist views,” said Jendruck in an email.

Though it likely didn’t expand the ISIS following significantly, Jendruck believes part of the strategy is to show off the support it already has.

“By implementing such social media campaigns, ISIS is not only encouraging an ‘online jihad’ from ISIS militants and supporters, but also attempting to show the West and the rest of the world its strong support base,” he said. “Yet, the actually level of support is indeed questionable.”

Whether or not intelligence agencies are concerned about these posts, and the ISIS fans living among their citizens, remains to be seen. It’s impossible to confirm whether these are staged photographs or if contributors are limiting their appearance in the tweets to avoid detection. But as Jendruck put it, “it is a big jump from sending out a pro-ISIS tweet to becoming a national security threat.” 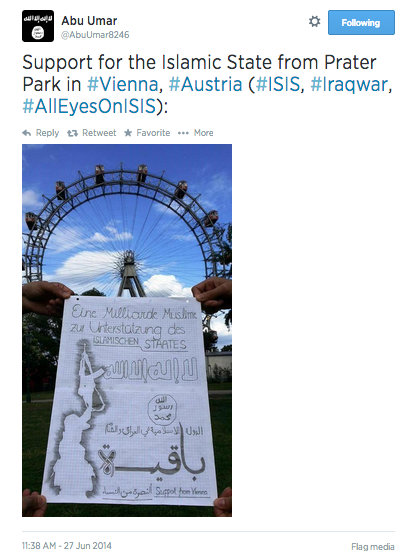 There have also been questions surrounding how notorious and successful the ISIS “Twitter Storms” have actually been—and how much is drummed up media attention; a byproduct of the sensational tweeting rather than an actual reflection of recruitment numbers and support.

Jendruck pointed me to a recent War on the Rocks data study, analyzing the online patterns of ISIS tweeting. According to War on the Rocks, the hashtag first appeared in mid-June when @Ansaar999 released the English equivalent to a larger campaign that includes the Arabic hashtag “#حملة_المليار_مسلم_لنصرة_الدولة_الإسلامية,” which roughly translates into “a billion Muslims who Support ISIS.”

Using the period of June 19 to 21, they found that two thirds of all the #AllEyesOnISIS tweets they measured (20,000 to be precise), happened within the first seven hours of the hashtag being rolled out. The top 50 tweeters were responsible for 20 percent of all tweets, averaging 126 tweets per person. Judging from the data, it suggests there is a concentrated effort by activists and operatives within ISIS to strong-arm the social media operation rather than relying on user engagement.

Either way, the extensive and continuing use of Twitter by ISIS militants suggests a grander motivation beyond cultivating new admirers the world over.

Crafting the narrative of your battle prowess is one of the oldest PR moves in the book of war: to ISIS Twitter is clearly part war paint and intimidation. And the many Iraqi soldiers reportedly fleeing from the battlefield (not the Kurdish peshmerga, though), might be aware of these brutal images proliferating the Internet. Same goes for the images of supposed Italians in Rome or Americans in New York: ISIS is projecting their reach, realistic or not.

One underlying potential strategy for social media is intimidation. By live-tweeting the execution of Shiite soldiers (now being called a war crime), or the several beheaded enemies of ISIS displayed as the spoils of war, ISIS members are beating their chests as widely as possible.

It’s no secret the Iraqi government was worried about the Twitter and Facebook accounts of ISIS fighters, and used internet blackouts and targeted suppression of social media to prevent ISIS use.[…….]

Few people, if any, would argue the existence of the ISIS terrorists.  Fewer still doubt the origins and motivation of the group.  Appearing on CNN’s “State of the Union” Senator Rand Paul (R-Kentucky) said: “I think we have to understand first how we got here,” …..”I think one of the reasons why ISIS has been emboldened is because we have been arming their allies. We have been allied with ISIS in Syria.”   ISIS features prominently in every new outlet around the world – but what’s with the Twitter?

Curiously, while the conflict in Syria has destroyed its infrastructure, amidst the bombing, fleeing, starvation, power cuts and fuel shortages, mainstream media would have us believe that ISIS has successfully set up shop in Syria to recruit “jihadist” using Google Chat, Skype, and Twitter (CNN).   Clearly, these terrorists are tech-savvy and know how to use in Twitter Digital Terrorism.

In their study, Burson-Marsteller concluded that Twitter was ‘a powerful channel for digital diplomacy’ – but what of propaganda?  To borrow from President Eisenhower, surely, Twitter propaganda‘has proved its right to a place of dignity in our military arsenal.’

Let us recall the role Twitter played in Iran’s 2009 presidential elections. While the mainstream media in the US hailed the success of “Twitter Revolution” in Iran, Wired Magazine  dispelled the notion in an aptly titled article “Iran: Before You Have That Twitter-Gasm…” pointing to the origins of the tweets (US) and their irregularity.  Elsewhere, it was revealed that much of the mischief behind the ‘newsfeed’ from Iran traced back to Israel.

Egypt was another example.  The Western media contributed to the success of the Egyptian revolution to social media, Facebook and Twitter, earning Google boy Wael Ghonim a glorious, albeit fleeting moment in history.   This narrative obfuscated America’s role in the uprisings. Freedom House had provided “advanced training on civic mobilization, strategic thinking, new media, advocacy and outreach“.   In 2010, Freedom House boasted of teaching new media tools to Egypt’s “hope”.

This much said, what is the purpose behind tweeting gruesome images of mass killings in Iraq; proposing that Westerners are being recruited, and in some cases, ‘ordered to go back to Britain’ to continue the ‘jihad’; prompting the British PM David Cameron to warn that ‘jihadist were planning to attack Britain’ (The Telegraph)? Regardless of where these tweets are being originated, one must surely wonder Cui bono?

To understand to whose benefit, we must look at the potential impact of these messages.  Without a doubt, the fear instilled by seeing images of these atrocities could break down or weaken resistance.  This is an old tactic using modern technology.   For example, during the Persian Gulf War of 1991, PSYOP units dropped over 29 million leaflets to encourage Iraqi soldiers to surrender, usually by stressing the inevitability of their defeat.   Estimates show that “nearly 98% of all Iraqi prisoners acknowledged having seen a leaflet; 88% said they believed the message; and 70% said the leaflets affected their decision to surrender.” Of the estimated 100,000 soldiers who deserted or surrendered, many were found carrying leaflets in their hands or carrying them in their clothes[i].  It is plausible that surrender is a motive behind these tweets.

Additionally, both fear-induced surrender and revenge could serve to draw in fighters to side with one group or another, lubricating the killing machine.   As importantly, if not more so, the tweets promoted by mainstream media are intended not only for Western audiences, but also as far and wide as the media’s reach takes it.   Accompanied by propagandist commentaries and language such as another 9/11 is upon us, the US (with help from some allies) has presented a justification for intervention and occupation of sovereign lands – a plan in the making for decades (see Terror in Iraq; Roots and Motivation).

In all this, there is another prize.  The US-led countries that devastated Iraq, Libya, and Syria in the last decade alone have been harshly criticized for barring refugees from entering their country, even those Iraqi interpreters who helped the allied forces.    The ‘threat’ of “jihadists” going to Britain (France, Germany, or elsewhere) ensures that that door is slammed shut in the faces of those who escape from the mayhem created by the “free and civilized world” (with help from local allies).

It may well be that these tactics are not without some forethought. In 2006, Max Boot who was introduced to a gathering at the Milken Institute as one of the top 500 most influential people in the making of US foreign policy in America, addressed the matter of  ‘homebound terrorists’.  Using 21st century terminology ‘Jihadist’, he was referring to the 1859 invasion of Sudan by the British and the ease with which the crazy ‘jihadist Mahdi’ and his followers were gunned down without any fear of repercussion that the enemy – Sudanese who had been terrorized,  would follow them back to England.  In his view, these days, open borders posed a problem which could open the door to ‘enemy Jihadists’ retaliating.    Rest easy Max.  Twitter has solved the problem for you.

Soraya Sepahpour-Ulrich is an independent researcher and writer with a focus on U.S. foreign policy and the role of lobby groups in influencing US foreign policy.

Online extremism: we need to target causes rather than symptoms

Although this app was shut down last week, ISIS followed up by launching their largest social media campaign to date. The recently proscribed terrorist group is now asking supporters around the world to go out into public spaces and take photos of themselves holding the ISIS flag, and then post the photos online along with the Arabic hashtag ‘The Friday of Supporting ISIS’ or the English ‘All eyes on ISIS’.

Besides this, they’ve recently started to use “Twitter Bombs”, in which supporters tweet propaganda with unrelated hashtags like #Brazil2014 and #WorldCup, thereby finding it a new audience.

This global hashtag strategy blends a sense of global community with popular culture around what is, in essence, a terrorist agenda. The more ISIS is able to mainstream themselves as revolutionary activists, rather than terrorists, the more they will be able to reach out to young recruits and tap into alternative funding streams. This is what their social media strategy is intended to achieve.

ISIS are also aiming to build greater credibility for themselves as the ‘only game in town’, superseding the strength and popularity of rival groups such as Jabhat al-Nusra and other al-Qaeda affiliates.

Meanwhile, governments and counter-terrorist practitioners are, as always, on the back foot, still relying on negative measures to try and block, filter and censor the feeds coming from extremist networks. As one account is taken down, others appear. Counter-content that challenges the ISIS narrative is woefully lacking.

Last week, the British government published a draft order deeming that anyone supporting ISIS will be undertaking a criminal act. Although the promotion of terrorist organisations is already illegal under the UK Terrorist Acts, it is important that ISIS was named specifically. It will be interesting to see if social media users retweeting and reposting ISIS propaganda are prosecuted, or if this is more just civil service manoeuvring.

This is the first time that the world is facing a true case of Jihad Trending. With the rapid advancement and quick evolution of social media, we are witnessing online tools being used to cultivate support, recruit foreigners, connect with alternative forms of funding and spread a well-articulated propaganda messaging to the masses.[LeftFootForward]