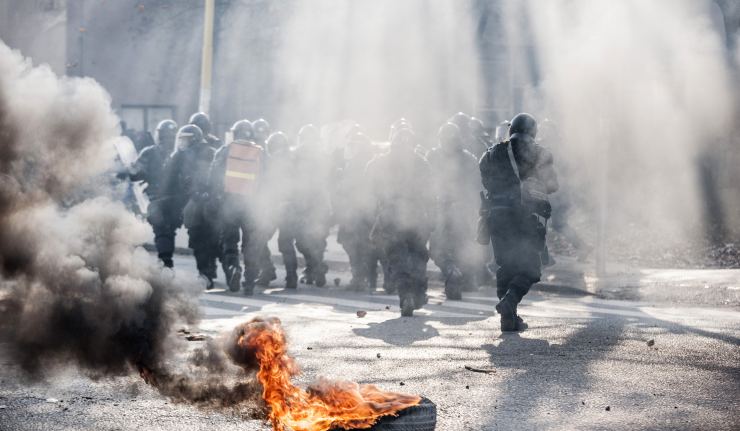 Police in Bosnia fired rubber bullets and stun grenades to disperse hundreds of anti-government protesters in the capital Sarajevo on Friday, a Reuters reporter said, on the third day of unrest over unemployment and political inertia in the Balkan country.

The protests began on Wednesday in the northern town of Tuzla, where workers took to the streets angry at the closure of factories sold off by the state.

Some 100 hooded young men were seen storming the building with flames and thick smoke billowing from the first floor windows a short while later.

Thousands of protesters cheered them on as they carried out their rampage and prevented two fire engines from reaching the building.

The violence came on the third day of protests over the dire economic situation in a country where unemployment stands at 44 percent.

Protests have spread to other cities. Demonstrators clashed with police and pelted government buildings with stones in Zenica and Sarajevo Friday, the klix.ba news portal reported.

As protests have spread, the demands have broadened, with demonstrators asking not just for better economic conditions but for an overhaul of the political system. According to non-profit Transparency International Bosnians experience more corruption than any other Balkan state.

An election is scheduled for October.

Prime Minister Nermin Niksic, who held an emergency government meeting on Thursday, has recognized the validity of the protesters’ complaints, but implored them to refrain from violence.